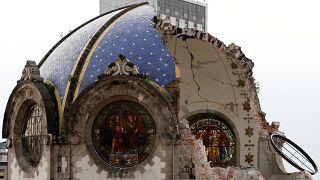 Updated: 25/09/2017
<p>More than 150 churches were damaged during last week’s deadly earthquake in Mexico, according to the country’s Catholic authorities.</p> <p>Many of the battered buildings are in the state of Puebla, where the epicentre was located.</p> <p>A child’s baptism turned into tragedy when a church roof collapsed in Atzala. Eleven family members were killed, including the two-month-old girl being christened.</p> <p>Later a planned wedding took place outside under a tent.</p>
no comment