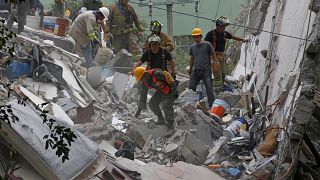 Firefighters, police, soldiers and civilians have been working frantically to pull people trapped under collapsed buildings in Mexico, following the country’s deadliest earthquake in 32 years.

Firefighters, police, soldiers and civilians have been working frantically to pull people trapped under collapsed buildings in Mexico, following the country’s deadliest earthquake in 32 years.

More than 52 survivors have been plucked from several disaster sites in the capital Mexico City since Tuesday afternoon’s 7.1-magnitude quake.

Among them were 11 people rescued at the Enrique Rebsamen school.

At the site, rescuers have been in touch with a 12-year-old girl trapped in the rubble. But some 15 hours into the effort, rescuers could not exactly locate the girl, identified only as Frida Sofia.

A human chain of rescuers has formed at the scene, periodically demanding silence from bystanders to allow them to hear any calls for help.

At least 237 others have died and 1,900 were injured in the quake, which caused some 52 buildings to collapse in Mexico City alone and more in the surrounding states.

Throughout the capital, crews were joined by volunteers and bystanders who used dogs, cameras, motion detectors and heat-seeking equipment to detect victims who may still be alive.

Officials have not used heavy-lifting equipment for fear of crushing possible survivors.