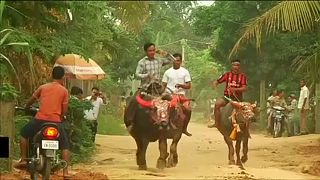 Cambodians gather to mark Festival of the Dead finale

Cambodians have been marking the final day of the Festival of the Dead.

The annual gathering allows people to offer food and say prayers to the spirits of family members and friends who have passed away.

At the Vihear Sour Pagoda, close to the capital, Phnom Penh, hundreds gathered to watch horse and buffalo races. They then went into the pagoda to put rice into the monks’ alms bowls and to lay various dishes on the floor for the monks to eat – actions believed to reach the souls of the deceased.

Every year, people come from far and wide to visit the Vihear Sour Pagoda for the two-week long festival, which ends on the 15th day of the 10th month of the Khmer calendar, with hopes of luck and prosperity. T
The Festival of the Dead has taken on added significance since the fall of the Khmer Rouge, a regime that killed about a third of the population. As many as 2.2 million people were executed or died of torture, starvation or exhaustion during the Khmer Rouge’s murderous bid to create a peasant utopia from 1975-1979.