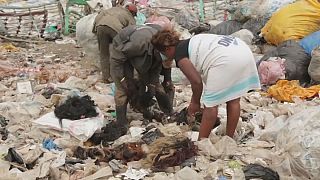 In one of Africa’s largest dumps, some residents are making a living by collecting and recycling hair from mountains of rubbish.

Nairobi’s Dandora Municipal Dumpsite stretches as far as the eye can see. It was declared full in 2001 but has remained active, with 850 to 1,500 tons of waste arriving every day. Kenya last month implemented a ban on plastic bags, a major contributor to the towering piles of trash.

Many environmentalists have campaigned for years to have the dump shut down, calling it an eyesore and a hazard. But for thousands of Kenyans, the dump is their means of existence.