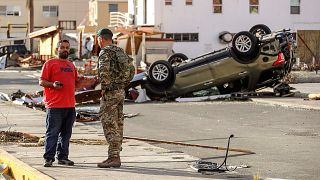 A resident of Tortola in the British Virgin Islands has said the devastation to the island following Hurricane Irma feels like “Armageddon” but people have not lost their sense of humour and are rebuilding “one brick at a time”.
Irma bullied through much of the Caribbean – Antigua, St. Martin, St. Barts, Anguilla, the U.S. and British Virgin Islands, Turks and Caicos, the Bahamas and Cuba before enveloping nearly all of Flordia. It narrowly skirted Puerto Rico, Haiti and the Dominican Republic.

Irma’s confirmed death toll is 61 and still rising, 38 in the Caribbean and 23 in the United States.

Meanwhile British Foreign Secretary Boris Johnson visited Tortola to survey the damage and pledged to get the island “back on its feet again.”

Johnson arrived in Barbados on Tuesday and was making trips to the heavily damaged British Virgin Islands and to Anguilla.
Johnson has rebuffed charges that Britain has been slow in its response to the catastrophic storm that caused severe damage to many islands.

Britain has already sent more than 700 soldiers and 50 police officers to the British Virgin Islands to help restore order there. A landing ship is in place and a Royal Navy ship will join it.

The foreign secretary plans to meet with governors and with officials leading recovery work.
He says Britain has made an unprecedented effort to help.