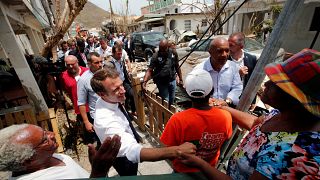 France’s President Emmanuel Macron has pledged to quickly rebuild the islands of the French Caribbean during a visit meant to dispel anger at his government’s response to Hurricane Irma.

Dozens of people were killed in the region, where the islands hardest hit by the storm were mainly overseas territories belonging to Britain, France and the Netherlands. The US Virgin Islands were also hard hit.

European countries and the United States have sent troops to deliver aid and provide security after the storm toppled homes and hospitals, but locals and tourists short of food or shelter say help was slow to arrive.