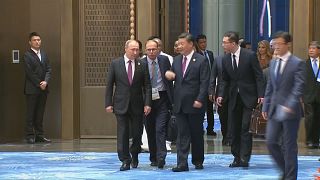 Chinese President Xi Jinping on Monday hosted a banquet to welcome foreign leaders at a summit of the BRICS group of five major emerging economies in China’s southeastern city of Xiamen.

At the summit the BRICS nations – Brazil, Russia, India, China and South Africa – called for comprehensive reform of the United Nations and its Security Council to better represent developing countries.

BRICS was formed as an association of fast-growing large economies about a decade ago to advocate for better representation for developing countries and challenge the Western-dominated world order that has prevailed since the end of World War II.

It soon achieved agreement to increase the share of voting rights for emerging markets in world financial bodies the International Monetary Fund and World Bank.

It has also started operating its own development bank.

Xi wants BRICS to play a more important role in international affairs, even as some observers suggest its power is waning given rivalry between China and India and the economic woes of Brazil, Russia and South Africa.