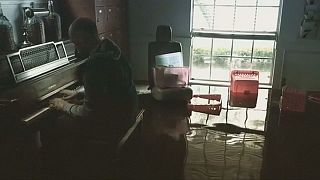 Updated: 01/09/2017
<p>Local musician and Pastor, Aric Harding found his Texas home flooded as a result of Storm Harvey.</p> <p>Harding returned to his home to collect some of his children’s belongings. He sat down in the knee-deep water and played a few chords to prove to his son that the piano was still working. </p> <p>He later shared the footage that was filmed by family friend; Greg Aylor on Instagram with the caption ‘‘What we used to have going as a city is gone.’‘</p> <p>Harvey’s home is in Friendswood which is part of the Houston metropolitan area where thousands of homes were damaged by severe flooding in the aftermath of Storm Harvey.</p>
no comment