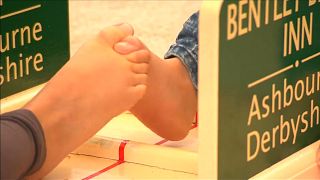 May the best toe win!

Toe wrestlers have been putting their best foot forward in a bid to be named world champion!

Competitors gathered at a small village in Derbyshire, England, to lock toes in the aptly named arena, the ‘Toedium’.

The contest started in 1976 when a group of walkers set about searching for a game that only the British could win.

With a lack of any talent in existing sports, the decision was made to invent a new one and the weird event has been an annual highlight since.

Health and safety is always respected with a podiatrist on hand to inspect feet for fungus and injury before the bouts begin.