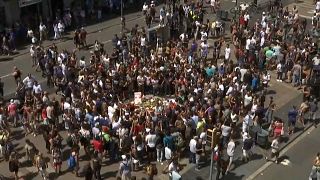 Silence and solidarity as Barcelona pays tribute to terror victims

Spain’s King Felilpe and Prime Minister Mariano Rajoy joined thousands of people at Barcelona’s main square on Friday for a minute’s silence in honour of the victims of the Catalonia terror attacks.

At noon, the Placa de Catalunya was packed with people eager to pay tribute to the 14 dead and 130 injured in the twin attacks in Barcelona and the town of Cambrils.

Victims came from more than 30 countries – from France to Pakistan, from Argentina to Australia.

Children are among those reported dead or missing in this, the latest in a string of militant vehicle attacks on civilians across Europe.