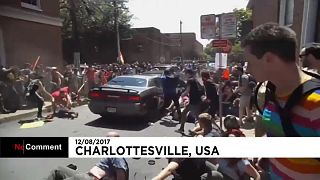 One person was killed and over a dozen were injured after a car ploughed into people protesting a white nationalist rally in Charlottesville, Virginia, on Saturday.

In the dramatic footage, some protesters can be seen attacking the silver sedan with sticks before it shoots back, colliding with several people gathered at the rear of the vehicle.