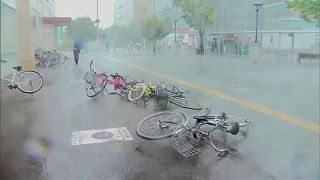 A strong typhoon made landfall on Wakayama Peninsula, western Japan on Monday, bringing heavy rain and strong winds.
Typhoon Noru caused at least one death and several were injured, according to Kyodo news.
The Japanese Meteorological Agency has issued flooding and landslides warnings as the slow travelling speed of the typhoon may lead to extended heavy downpours.
The season’s fifth typhoon is also disrupting transportation.
Train services in the area have been suspended or delayed and more than 300 flights cancelled in and from airports in western Japan, Kyodo news reported.
The typhoon is expected to move toward central Japan, then to northern Japan on Tuesday.