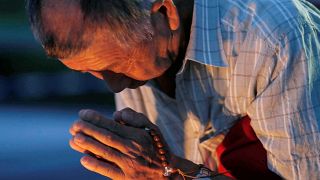 Japan has marked the anniversary of the world’s first atomic bombing in Hiroshima, 72 years on.

A sombre memorial ceremony in the city was led by Prime Minister Shinzo Abe.

“Here in Hiroshima city, I renew my pledge to do my utmost to bring about a nuclear free world and eternal peace. And I also pray for the peace of the atomic bomb victims and the bereaved families, those attending here as well as the citizens of Hiroshima city,” he said.