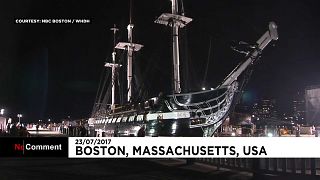 The USS Constitution, warship from 1797, returns to water

Crowds gathered to watch as the vessel was floated off its blocks and into the harbour.

The undocking of “Old Ironsides” marked the end of restoration work that started two years ago, officials said.

A celebration was held at the USS Constitution Museum.

The wooden ship was launched in 1797 and earned its famous nickname notching victories in the War of 1812 between the US and Britain.

Crowds gathered to watch as the ship was floated off its blocks and into the harbour.

The most recent work included replacing 100 hull planks and installing 2,200 new copper sheets, 500 of which were signed by nearly 100,000 museum visitors, according to USS Constitution Museum President Anne Grimes Rand, who called the ship “a wonderful symbol for our democracy