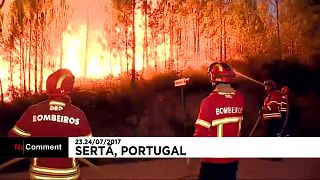 More than 2,300 firefighters are battling to stop flames spreading in central Portugal after a new wave of forest fires broke out.

The biggest fire is raging around the municipality of Serta in the Castelo Branco region.

Locals are doing their bit to help emergency services combat the flames, even using hosepipes, as seen on pictures broadcast by Portuguese television.

Fire crews are also battling another blaze that started on Sunday afternoon near Coimbra.

In June, 64 people were killed after their vehicles were engulfed by flames in a hilly region some 200 km northeast of Lisbon.

More than 150 others were injured.