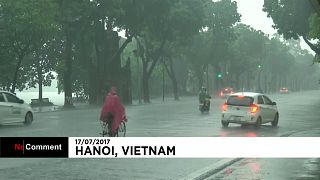 At least once person has died in storm Talas, the second in the country since the start of the year.

Authorities in Nghe An province said the woman died after the roof of her house collapsed.

While 10 people are missing after a cargo ship sank transporting coal.

Flights from and to airports in central provinces were cancelled until further notice.