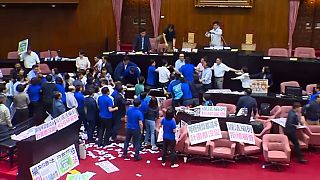 Violence erupted between MPs in Taiwan’s parliament on Friday in a row over budget plans.

The fight broke out when lawmakers from the Nationalists, or Kuomintang, criticised financial proposals for the Infrastructure Development Program.

Members from the ruling and opposition parties grabbed each other and threw water bombs.

The infrastructure development plan has been treated by President Tsai Ing-wen’s administration as its key economic stimulus project.
It includes investments in light rail lines, urban and rural development, and green energy.