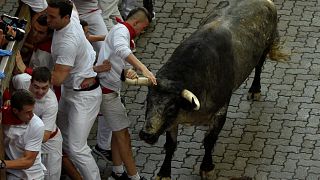 Two American visitors and a Spaniard were injured in the first bull runs at this year’s San Fermin festival at Pamplona in Spain’s Basque Country.

The Spanish man, aged 46 and from Navarra, was undergoing surgery on Friday (July 7) for serious injuries to his head and leg after he was tossed by a bull. The two American men – aged 29 and 35 – were less seriously hurt but were also treated in hospital.

The annual sprint sees runners tear through the old city’s narrow streets, ending up in the bull ring.

At least two animal rights protesters from the Vegan Strike Group invaded the ring to try to protect a bull that lay bleeding and dying having been knifed.