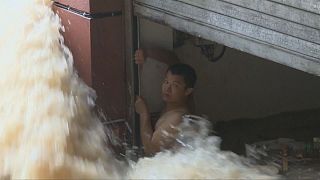 A man charged with directing the evacuation of a flooded underground car park in south China was rescued in the nick of time after missing his chance to leave. Rescuers attempted to save him by using a fire hose as a rope. Surging flood water meant he initially failed to grasp it, but he was finally able to be pulled up by rescuers.