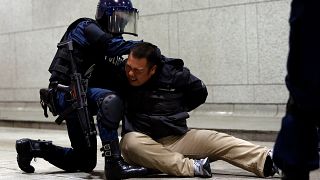 Japanese police held anti-terror security drills at Tokyo’s international airport and the Bank of Japan on Wednesday, (June 21), to enhance security ahead of the 2020 Tokyo Olympic and Paralympic Games.

The two drills came on the same day as the country beefs up its counter-terrorism measures ahead of the Games, local media said.

About 40 people from the Bank of Japan and police took part in a drill where actors who pretended to be assailants sought to break in and place a bomb in the central bank. Police responded, apprehending the ‘attackers’ and called in the Metropolitan Police Department, (MPD), bomb disposal unit to remove a bag that was supposed to have contained a bomb.

At Narita International Airport, about 180 people, including police and airport staffs as extras, were evacuated during a similar drill. This was the airport’s first large-scale anti-terrorism drill this year.