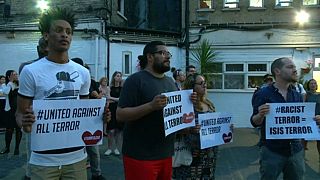 Updated: 20/06/2017
<p>Mayor of London Sadiq Khan attended a vigil for the victims of the London mosque attack on Monday evening, less than 24 hours after a man driving a van ploughed through crowds of Muslims after evening prayer.</p> <p>Khan, London’s first Muslim mayor, praised the city’s response to the attack and said the UK capital would not allow any terrorist actions to divide communities.</p> <p>“What you’ve seen over the last 24 hours is Muslims, Jews, Christians, Hindus, Sikhs, those members of an organised faith, and those who aren’t, rich, poor, old, young, coming together and saying ‘not in our name, we will not let you divide us, we will be stronger’” said Khan.</p> <p>London Mayor Sadiq Khan joined Muslim worshippers on Monday evening (June 19), less than 24 hours after a man driving a van had targeted a group leaving the same centre in north London, and praised the city’s response to the attack.</p> <p>The attack, in the early hours of Monday, injured 11 people, two seriously.</p> <p>Darren Osborne, a 47-year-old white man, was named as the attacker shortly after the incident and was grabbed at the scene by locals and pinned down until police arrived.</p>
no comment