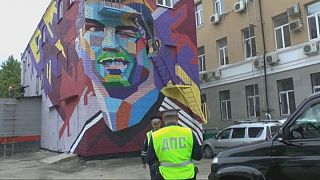 Cristiano Ronaldo: Room With a View in Russia

Portuguese football legend Cristiano Ronaldo received a colourful welcome when his national team arrived in the Russian city of Kazan for the 2017 Confederations Cup.
A large multicoloured portrait of the soccer star has been painted on the facade of a building within sight of the hotel where the Portuguese team is staying.
The graffiti artwork, depicting a smiling and winking Ronaldo, is about 300 square metres high, the height of a three-storey building and features 20 colours, according to Russian news agency TASS.
Portugal arrived in Kazan on Wednesday and face Mexico on the pitch in their first Group A match on Sunday.