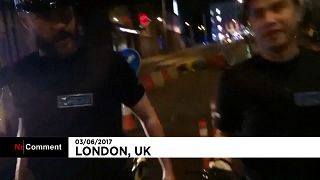 As people enjoyed a Saturday night out in London, terror struck the streets of the capital.

Just after 10pm, three men plouged a van into pedestrians around London Bridge and began stabbing people around Borough Market.

Within eight minutes they were shot dead by armed police.

(Thanks to Caroline Breniere and Kaine Pierri.)