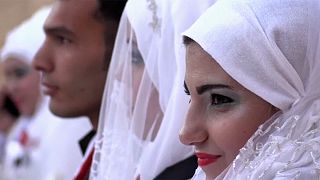 Thirty couples paraded through Aleppo garbed in white and military uniforms before taking their vows, in what has been described as the city’s biggest wedding celebration in six years. The ceremonies were reportedly supported by the Syrian government and a number of charities. Security remained on high alert for the occasion.