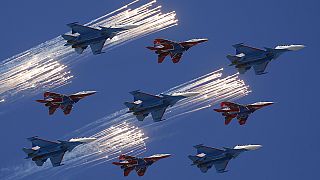 Updated: 08/05/2017
<p>The Russian military on Sunday conducted a rehearsal ahead of the Victory Day Parade in Moscow’s Red Square.</p> <p>Held on May 9, Victory Day is traditionally widely celebrated in Russia and is usually marked with a huge military parade in Moscow as well as other cities.</p> <p>Victory Day marks Russia’s victory over Nazi Germany in World War II.</p>
no comment