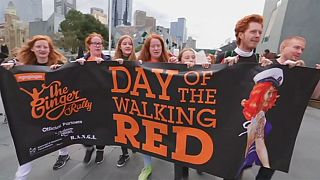 Updated: 03/05/2017
<p>After years of being on the receiving end of insults, nicknames and jokes, thousands of redheads took to the streets of Melbourne to proclaim their ginger pride.</p> <p>They came out in force to show their spirit won’t be subdued by name-calling.</p> <p>In Australia redheaded people are often referred to by derogatory names such as “rangas”, meaning orangutan, blood nuts referring to a red head and carrot tops.</p> <p>Here, though, everyone was out to show they were happy in their own skins.</p>
no comment