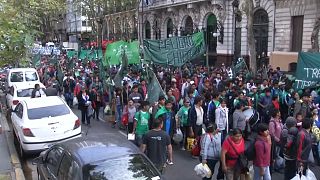 Around 2,000 small-scale farmers came together in the Argentine capital on Monday (April 24) to hand out 20 tonnes of produce to members of the public as part of a demonstration calling for improved working conditions and land access. The so-called “verdurazo” – “verdura” is the Spanish word for vegetable – was planned to draw attention to the economic crisis the confederation says is taking a toll on the farming regions throughout the Buenos Aires province.