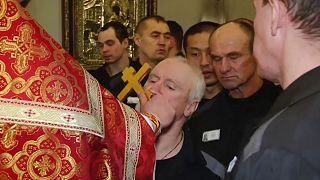 Easter mass in a Russian prison

Easter Mass was held in a maximum security prison in Bor, Russia, at midnight on Saturday.

The correctional facility in the Nizhny Novgorod region has a specially designated church within its territory with its own priest, Father Evgeny Panushkin.

The facility contains prisoners who formerly served in various law enforcement bodies and the courts.

Most of the inmates are serving long prison sentences for crimes largely related to the abuse of power and inflicting serious harm (including death) while on service, as well as drug-trafficking and other crimes of corruption facilitated by the power of their uniforms.