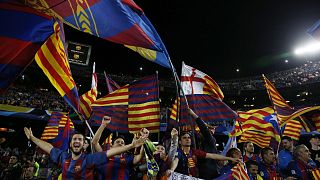 Barcelona produced one of the greatest comebacks in European club football history, beating Paris Saint Germain 6-1 to win their UEFA Champions League tie 6-5 on aggregate – thanks to three goals in the last six minutes of an incredible match on Wednesday (March 8)

The images include: fans going back to the stadium in the last few minutes of the match; fans leaving the stadium and chanting; French fans saying they are not happy; more Barcelona fans celebrating.