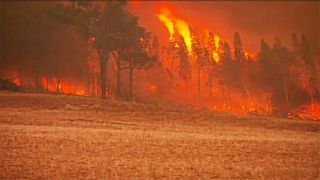 In what has been described as the worst conditions for fire in the state’s history, rural firefighters in the Australian state of New South Wales on Sunday were battling close to 80 out-of-control bushfires.

Temperatures in the north of the state soared above 40 degrees Celsius (104 degrees Fahrenheit), combining with strong winds and dry conditions to create what the Rural Fire Service described as “catastrophic” conditions.

Five of those fires included emergency warnings for local residents.

By Monday some of the fires had subsided, but thick smoke still filled the sky.

Firefighters went door to door to advise locals to leave their homes or seek shelter but so far there have been no reports of loss of life or property.

More than 2,000 firefighters, many of them volunteers, were battling the fires.