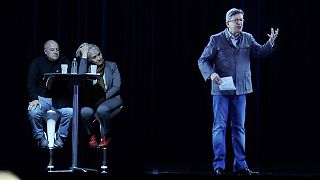 France’s Far Left candidate Jean-Luc Melenchon surprised his supporters on Sunday (February 5) by ‘appearing’ in front of them in the form of a hologram in Aubervilliers.

Using a very life-like hologram, Melenchon appeared via projection before thousands at a venue on the Paris outskirts, while speaking live in Lyon, over 450 kilometres away.

Supporters in Aubervilliers said they were captivated by the hologram which was so realistic some said they had began to forget he was not actually there.