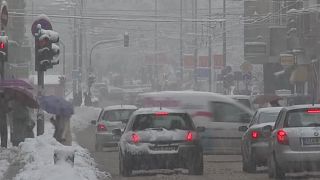 Heavy snowfall in Bosnia and Kosovo

A cold snap and showers have hit much of central and eastern Europe in the last few days, including much of the Balkans.
Bosnia was bracing itself for a spell of extremely cold weather forecast to begin later on Thursday, with temperatures expected to remain between -11 and -26 degrees centigrade.
Kosovo Meteorological Institute issued a warning to stay indoors after Kosovo was expected to be hit by a polar cyclone.