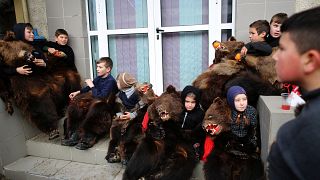 People on the streets of a central Romanian town performed a traditional New Year’s bear dance on Friday.

Locals wearing bear furs and folk costumes paraded on the streets of Comanesti, about 300 kilometres north of the Romanian capital, Bucharest.

People from all age groups could be seen dancing, playing musical instruments and singing as part of the ritual traditionally performed to mark the end of each year.

In pre-Christian rural traditions, dancers wearing coloured costumes or animal furs went from house to house in villages, singing and dancing to ward off evil.

According to legend, if a bear enters somebody’s house it brings welfare, health and luck.