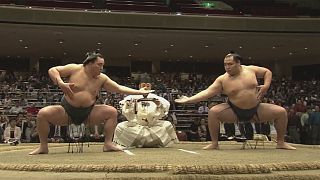 An exhibition event has been held in Tokyo to promote understanding of sumo wrestling ahead of the 2020 Tokyo Olympic and Paralympic Games.

The Japan Sumo Association invited about 2,300 people, including foreign embassy officials, overseas students and people with disabilities, to the event at the Kokugikan sumo arena.

Sumo wrestlers performed the rituals that precede each bout, and hairdressers demonstrated how to create the wrestlers’ distinctive hair style. English translations and sign language were provided.

Wrestlers Harumafuji and Kakuryu demonstrated three styles of postures, including defense and attack.