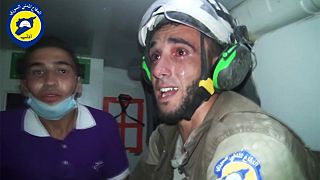 Rescuer sobs as he pulls baby alive from Idlib rubble

Footage released by the Syrian Civil Defense Rescuers purports to show a baby and a woman being pulled alive from rubble in Idlib.

A rescue worker in the video holds the baby in his arms and can be seen crying as they sit in what appears to be an ambulance.

He says that she was under the debris for two hours before the rescue took place.

According to the Local Coordination Committees of Syria there were at least 21 fatalities resulting from airstrikes in the area on September 29.