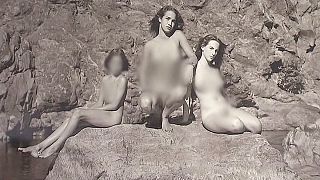 An exhibition by a US photographer has been shut down in Moscow amid claims it was showing child pornography.

The Lumiere Brothers Center for Photography closed the exhibit down after a protest by pro-Kremlin senator Yelena Mizulina, who called it ‘propaganda of pedophilia’.

The pictures were by Jock Sturges, 69, who is described in one of his biographies as a ‘lightning rod for controversy’ for his brand of nude photography.