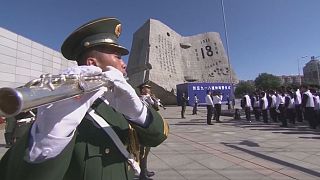 A ceremony is held to commemorate the 85th anniversary of the September 18 incident in Shenyang City, capital of northeast China’s Liaoning Province on Sunday.

On September 18, 1931, Japanese troops blew up a section of the railway under their control near Shenyang, and then accused Chinese troops of sabotage as a pretext for attack.

They bombarded barracks near Shenyang the same evening, beginning a large-scale armed invasion of northeast China.

The incident was followed by Japan’s full-scale invasion of China and the rest of Asia, triggering the War of Resistance against Japanese Aggression.