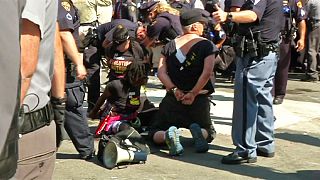 USA: clashes and arrests during the Republican National Convention in Cleveland

17 protesters were arrested during a demonstration in Cleveland, Ohio, on Wednesday (July 20), on the sidelines of the Republican National Convention, after they attempted to burn an American flag. Police used horses and bicycle police to cordon off the area as they tried to break up the demonstration and disperse the crowd of journalists, protesters and onlookers that had gathered.