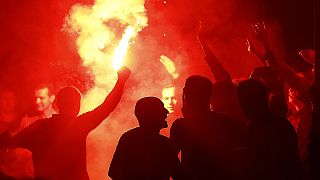 Euro 2016: England and France supporters face off in Lille

England and France football fans squared off in the centre of Lille on Wednesday (June, 15) night, as tension remained high in the northern French city.
Earlier, police used teargas to disperse rowdy England fans, the fourth time they were involved in violent incidents since the start of the Euro 2016 football tournament.