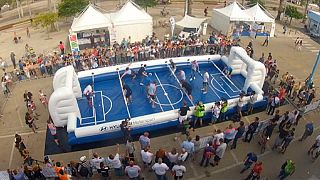 Rally drivers had some fun in Sardinia as they celebrated the start of the Euro 2016 tournament. The Rally Italia service point at Alghero became the Stade de France for a moment or two and the drivers became football stars as they took part in a lively table football game – on a giant scale.