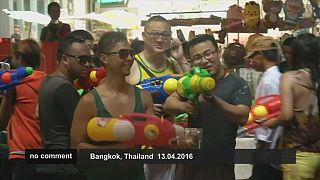 A water festival kicked off in Thailand on Wednesday – despite the country facing its worst drought in decades.

Thailand is facing its worst water shortage in two decades, with 14 out of 76 provinces affected and large areas of farmland at risk.