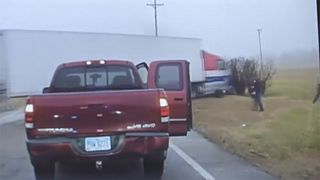 GRAPHIC: US sheriff mowed down by lorry

GRAPHIC: US sheriff mowed down by lorry

This is dashcam footage showing a sheriff in Ohio, USA, being run down by a lorry.

It happened as he was directing traffic on January 8. The Preble County Sheriff’s Department has recently released video of the incident.

Local media reported Captain Brad Moore was directing traffic at a car crash when the truck was hit by a train.