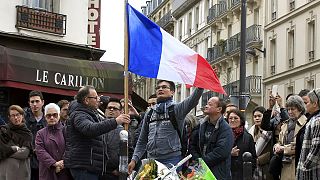 The same night officers also moved in, guns drawn, after mourners panicked near the Carillon bar, where crowds have laid flowers and lit candles in memory of the 15 people killed there.

French troops have deployed by the thousands and tourist sites remain shuttered in one of the most visited cities on Earth.