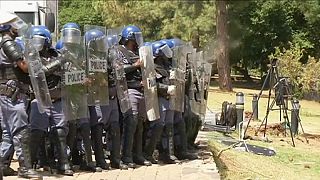 South African students break down a fence around government buildings

Thousands of angry South African university students capped a week of protests on Friday (October 23) with a march on the buildings in Pretoria where President Jacob Zuma has his offices.

Police had set up guard around the building before a scheduled address by Zuma. The students chanted slogans, argued with the police and pulled down a fence around the building, as the post-apartheid “Born Free” generation starts to flex its political muscle. “We’re not here to fight or to do anything, we are asking Zuma to implement their policy that will ensure that a black child is being given a sufficient opportunity to get education,” one student told Reuters. Another student said the protesters “wanted answers” and were not there to vandalise property.

Student leaders are due to meet Zuma and university professors at the Union Buildings to press their case, arguing that the costs of tuition are too high for many black people, perpetuating South Africa’s racial inequalities.