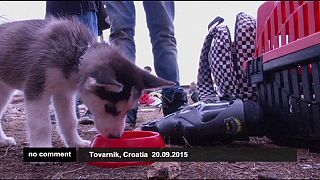 ‘I love this dog ! I need her!’ responded 17-year-old Syrian refugee Aslan when asked why he had chosen to bring his furry friend on his travels from Damascus, all the way across the Mediterranean, to Greece. Despite initially being told he wasn’t allowed to bring his dog, Rose, Aslan made a passport for his pet and walked an estimated 500 km with her by his side.