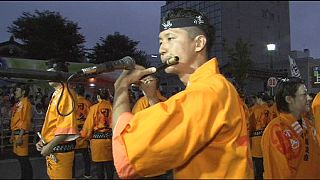 Nebuta Festival kicks off in Japan

The Nebuta festival, one of Japan’s largest summer events, has started in the northern city of Aomori. It take place from August 2-7. Historians can’t agree on the origins of the festival, but some believe the Nebuta floats were invented by General Sakanoue no Tamuramaro at some point in the 9th century during a battle. The general and his army created gruesome creatures from cloth and bamboo to scare away the enemy. And It must have worked because, from this, the floats of the present day Aomori Nebuta Matsuri were born.