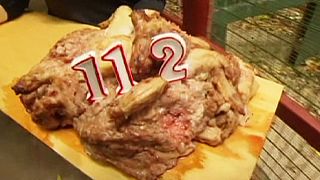 Updated: 28/05/2015
<p>Cassius, the world’s largest and oldest crocodile, celebrated his 112th birthday at his retirement home on idyllic Green Island, a Great Barrier Reef coral cay off the coast of Cairns, Australia.</p> <p>Recognised by Guinness World Records as the largest crocodile in captivity, and also thought to be the oldest, Cassius measures 5.48 metres (18ft) in length and weighs 1300kg.</p>
no comment