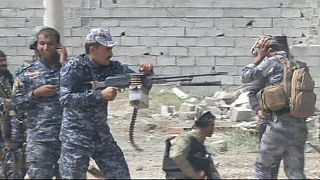 Iraqi troops were fighting in the streets near Tikrit General Hospital on Monday, where they believe Islamic State militants who control the city are sheltering.

Blasts and plumes of smoke were seen around the hospital in the city’s southeast.

The video shows Iraqi soldiers firing weapons as they moved between houses and buildings near the hospital.

The militias backed out in protest over US involvement in the fight for Tikrit.