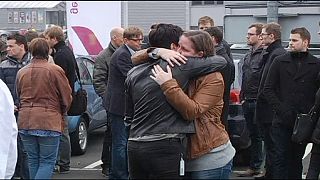 Emotional staff at Germanwings’ headquarters in Cologne held a minute’s silence to remember the 150 people killed in a plane crash in the French Alps.

It was held, according to Germanwings’ parent company Lufthansa, at 10.53 CET on Wednesday, exactly 24 hours since contact with the Airbus A320 was lost.

Six Germanwings crew are among the dead.

A service was also held at El Prat Airport, Barcelona, finishing with a round of applause.