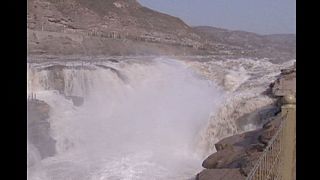 Updated: 15/03/2015
<p>A cascading waterfall of about 200 metres wide has been formed at the Hukou Waterfall, in the middle reaches of the Yellow River, creating a spectacular scene and attracting many tourists in recent days. </p> <p>The melting of upriver ice and increasing water discharge by the upstream reservoirs led to a surging water flow and formed the cascading waterfall in Jixian County, north China’s Shanxi Province.</p>
no comment